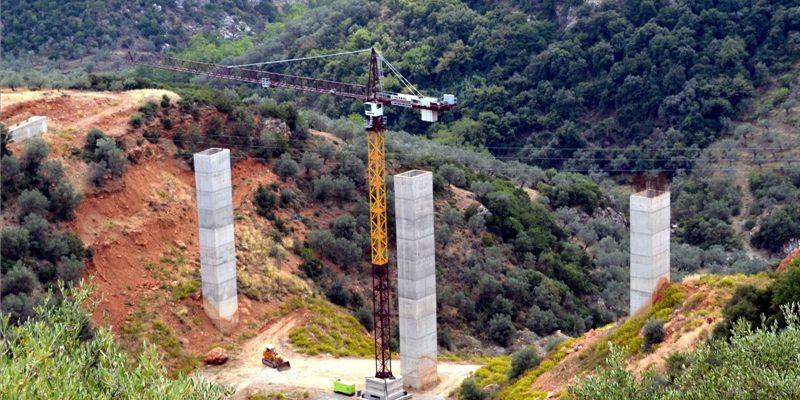 The Peloponnese Regional Governor, Mr. Petros Tatoulis, escorted by officials from the Peloponnese Region; attended the commencement of the works on the sections of the Tripoli – Astros, Elaiochori – Koumila and Koumila – Louloudi road axis. These projects have a budget of € 18,000,000 and € 5,300,000 and an implementation duration of 9 and 24 months, respectively.

“Thanks to our design, proper step by step planning and a steady pace, we are constructing a significant access road to coastal Arcadia, which will also be of strategic importance because it will also be linked to the eastern coastal axis of the Peloponnese Region,” he said from the places he visited at the commencement of the works on Tuesday, 9 October 2012.

Here follows the technical description of the projects:

Today, October 09, 2012, works commence on the project “CONSTRUCTION OF TRIPOLIS-ASTROS STREET OLIVOHORI SECTION”, which is part of the
improvement of the road axis that aims at better access to the Axis road Municipality
of North Kynouria.
We remind you that the contract for the construction of this 18,000,000 € budget project, was signed with the contracting company “HELLENIC HYDRO CONSTRUCTION SA” on 06-14-2012. The deadline for completion of the project is twenty-four (24) calendar months. The Managing Authority of the project is the Department of Transport Projects of the Regional Technical Directorate, and Head Authority is the Road Construction Directorate (D1) / GDSEE / GDGE.

The main object of the contract is the construction of a section of Tripoli-Astros street, which is located at the boundaries of OTA V. Kynouria. Its beginning is the CH. 0 + 00 (with CH 0 + 000 to EK Elaiochori) and its end is the CH. 1 + 218 west of Hani Tsimouri. This section is linked to the under-construction project of the KOUBILA-LOULOUDI section of “TRIPOLIS ASTROS” street in the Elaiochori area.

The study foresees the construction of an underground project (CUT & COVER) from CH. 0 + 950 to CH 1 + 082 and a temporary detour (Section K3) until its completion to serve traffic in acceptable safety and smooth transition conditions upon entry and exit from the Main Branch. The branches to the settlements of Agios Georgios and Elaiochori will also be restored. The paved road width of the road is 9 m (2 * (3.5 + 0.25 + 0.75)).

Today, 09 October 2012, works are also commenced on the project “INTEGRATION OF WORK IN THE ROAD SECTION KOBILA – LOULOUDI.” The main object of the contract is the completion of two (2) unfinished tall bridges on which only the pedestals were constructed, and the completion of the “KOUBILA – LOULOUDI” section of “TRIPOLIS ASTROS” street, of a total length of 2.0 m.

On 06-13-2012, the contract for the construction of this € 5,300,000 budget project
was signed by the “ILIOCHORA SA” contracting company.
The duration time for the completion of the project is nine (9) calendar months.
The Managing Authority of the project is the Department of Transport Projects, and
the Head Authority is the Department of Technical Services of the Peloponnese
Region.
The projects will be completed with the construction of the superstructure for which
special equipment will be used (use of CAROVARO equipment).In the position of the bridges, the width of the superstructure is determined per direction by a 3.50m wide lane, 0.25m steering lane, 0.75m sidewall, and 1.25m wide sidewalk with the ability to place electric lighting on it. Thus, the total width is defined to be 2 * (3.50 + 0.25 + 0.75 + 1.25) = 11.50m.

This project, in conjunction with the previous project “ELAIOHORI – KOUMPILA,” is part of the interventions for the improvement of the Tripoli – Astros highway aiming at the best possible access to the broader tourist area of the Municipality of North Kynouria.
Source: https://www.leonidion.gr/