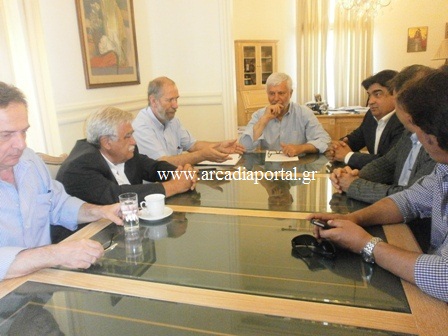 The “Elaiochori – Koubila” project on Tripoli-Astros road will be ready in 24 months. Today at noon, at the District offices, the contract was countersigned by Petros Tatoulis and the project’s contractor, Pavlos Gritsopoulos.

The project was undertaken by the contracting company “Hellenic Hydro Construction SA”. The project cost amounts to €18 million, the discount was 34.90% and the final cost will be €11,483,578.20.

The project was described as particularly tricky but very important for the road to Astros by the Regional Governor Petros Tatoulis. A particular characteristic of the project is that the works will be done on a road that will continue to be used by the citizens and thus there is the possibility of a bypass road.

According to the spokesman of the contractor, the project has lots of technical difficulties since there are rocky sections and many rockfalls.

The design of the project foresees the construction of an underground project and, additionally, the restoration of the branches to the settlements of Agios Georgios and Elaiochori. The asphalt pavement width is projected to be 9 meters.

The project was considered important and of major importance, because it is part of the general framework of improvements to the Tripoli-Astros road axis targeting the best possible access to the wider tourist area of the municipality of North Kynouria.